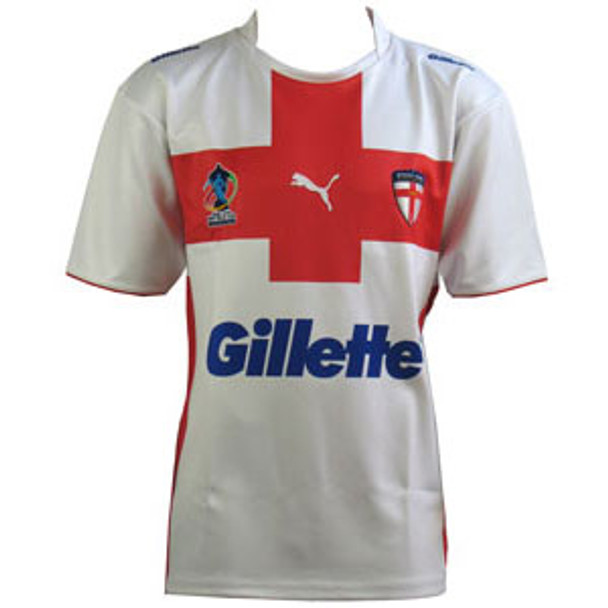 Back in 1985 a group of Rugby clubs (21 in total) split away from the Rugby Football Union (RFU) on account that they wanted to play Rugby profesionally, and receive payment for playing matches. They formed the "Northern Rugby Football Union", which is now called the "Rugby Football League". The England Rugby League team played their first international match in 1904 against a mixture of Welsh & Scottish players in Wigan. England had to start the match fielding only 11 players as Jim Lomas (Salford RL) had not turned up! It was a close match with England losing 9-3.
The Puma England home short sleeved rugby shirt is a 100% breathable Polyester material with embroidered and printed logos.
The Puma England home rugby shirt is a predominatly white shirt with a red flag across the centre.
This Puma Rugby shirt has the England Rugby League logo on the left chest, the Rugby League World Cup Logo on the right chest and the Puma Logo to the centre. The front sponsor is "Gillette".

MSRP: £51.95
Now: £19.96
Was: £51.95
Biarritz Olympique Pays Basque (BOPB) is a french professional rugby union team. rnrnBiarritz plays its home matches at the Parc des Sports Aguilra. When they need a larger stadium, they play their...

MSRP: £51.95
Now: £19.96
Was: £51.95
Biarritz Olympique Pays Basque (BOPB) is a french professional rugby union team. Biarritz plays its home matches at the Parc des Sports Aguilra. When they need a larger stadium, they play their home...

MSRP:
Now: £54.95
Was:
The men's Under Armour Extreme Coldgear 1/4-zip top delivers exceptional cold-weather performance when you need it most. It's crafted using the moisture-wicking ColdGear performance fabric that draws...

MSRP:
Now: £49.96
Was:
Made by BLK from polyester, the BLK england RFL rugby players winter gilet [navy] has a padded design that ensures that plenty of warmth is generated on even the coldest days and nights while the...

MSRP: £29.95
Now: £19.96
Was: £29.95
The Puma IRFU short sleeve polo shirt has an embroidered Puma logo to the right chest and an IRFU logo to the left chest. It is made from 100% Cotton.It has contrast coloured stitching to the sleeves.