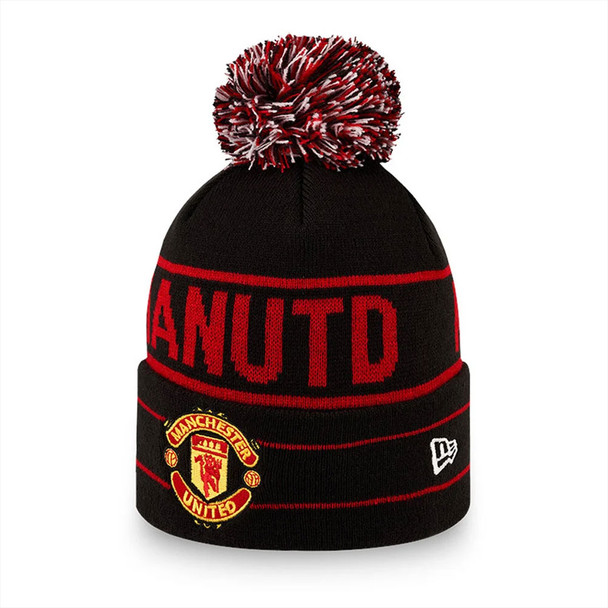 Wear the red and black of United, stay warm while you watch the match and enjoy unbeatable New Era style with the official New Era Manchester United Jake Bobble knit. Featuring an upturned cuff, on which the United crest is positioned at the front and our signature NE flag to the left, the design boasts a bobble top and is rendered in a strong, red, black and white colourway. A Man United wordmark and horizontal stripes are also jacquard across the crown.

MSRP: £25.96
Now: £22.96
Was: £25.96
Get ready for match day in this Manchester United bobble knit. An essential for every fan, it combines a hooped design with an official team logo and striking Man Utd wordmark. A ribbed cuff and New...

MSRP:
Now: £24.95
Was:
Stay warm while you watch the match and enjoy unbeatable New Era style with the official New Era Manchester United Wordmark Bobble knit. Featuring an upturned cuff, on which the United crest is...

MSRP: £22.96
Now: £19.96
Was: £22.96
Get ready for the tailgating season with this official New Era Tennessee Titans bobble knit. Perfect for both on-field and off-field action, our design features a Titans wordmark across the crown and...

MSRP: £22.96
Now: £19.96
Was: £22.96
Make it known that you’re following the Chargers with a New Era Los Angeles bobble knit. Featuring the Charger’s gold, navy and powder blue colourway, this winter-warmer is as cool as it...

MSRP:
Now: £24.95
Was:
Bobble cuff knit Graphite/Black design to the crown and cuff Yankees wordmark to the center of the crown Embroidered NY Yankees logo to the cuff in Black Fleece lined New Era...

MSRP:
Now: £12.95
Was:
The Gilbert Barbarians Supporter Rugby Ball is an eye-catching and colourful new design. All replicas are officially licensed and fully endorsed by the International unions. Balls in the licensed...

MSRP:
Now: £27.95
Was:
Whether you're training hard or watching the game, these Blues thermique Shorts are the perfect choice for complete comfort. The shorts have been constructed from lightweight fabric and have been...