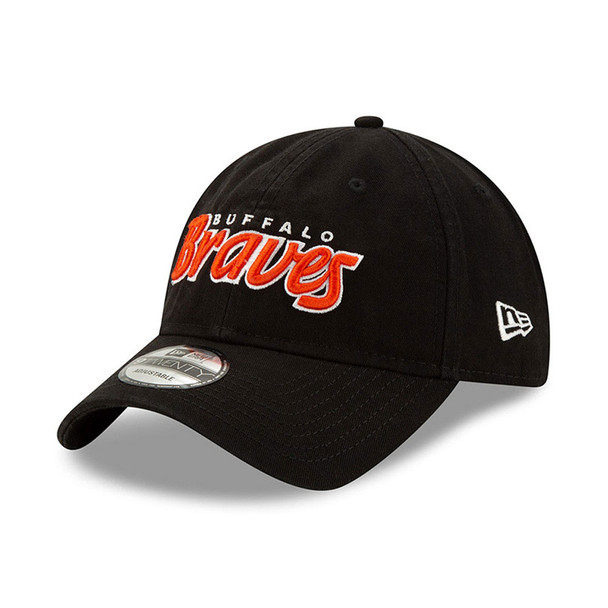 You can’t go wrong with retro style, so pick up an official New Era Los Angeles Clippers Hardwood Classic Nights 9TWENTY cap and celebrate the Clippers’ classic jersey. Harking back to the days of the Buffalo Braves, the Braves wordmark appears on the front of the cap, with their logo to the rear while also making use of a curved visor for enhanced solar protection. A patch detailing the years the team’s retro jersey was in use is applied to the cap’s sweatband.

Confused? . . . . The Buffalo Braves no longer exist as a team. They were originally based in Buffalo, New York until 1978 when the team moved to San Diego (and became the San Diego Clippers), The team then moved again in 1984 to Los Angeles and are now known as the "Los Angeles Clippers".

MSRP:
Now: £24.95
Was:
Cap for men or unisex cotton, arched visor, team logo embroidered on the front of the helmet, with sewn inner band for moisture absorption and snapback closure. Washed look.

MSRP: £17.95
Now: £14.95
Was: £17.95
Show your support for the most iconic franchise in US sports by picking up an official New Era New York Yankees League Essential 9FORTY cap. Finished in an eye-catching navy and gold colourway, the...

MSRP: £29.95
Now: £16.96
Was: £29.95
Get behind one of the biggest names on the eSports scene by wearing an official New Era Mercedes-Benz eSports 9FORTY cap. Built around a contoured crown, the cap combines a curved visor for...

MSRP:
Now: £22.96
Was:
Celebrate one of the NFL’s best-loved franchises by pulling on an official New Era Las Vegas Raiders Team Colour Block 9FORTY A-Frame Trucker cap. Boasting a Raiders logo at the front and an...

MSRP:
Now: £22.96
Was:
Step out in Bulls’ colours and enjoy timeless New Era style by choosing the official New Era Chicago Bulls Shadow Tech 9FORTY cap. Featuring the franchise logo on the front of the contoured...

MSRP:
Now: £24.95
Was:
Show your support for the Second City’s legendary NBA franchise by opting for an official New Era Chicago Bulls 9FORTY Hook cap. Rendered in the team’s official colourway, the contoured...

MSRP:
Now: £41.95
Was:
This 4 player badminton kit contains everything a recreational player could need and comes in a thermal bag for easy storage and travel. Content: 4 Hyper 6000 Rackets. 3 Nylon Shuttles...

MSRP:
Now: £17.95
Was:
The Popcat AFC features the classic lightweight injected EVA outsole of the Popcat. Now, the Popcat comes as a collaboration slider with the Arsenal Football Club making it perfect for all PUMA...