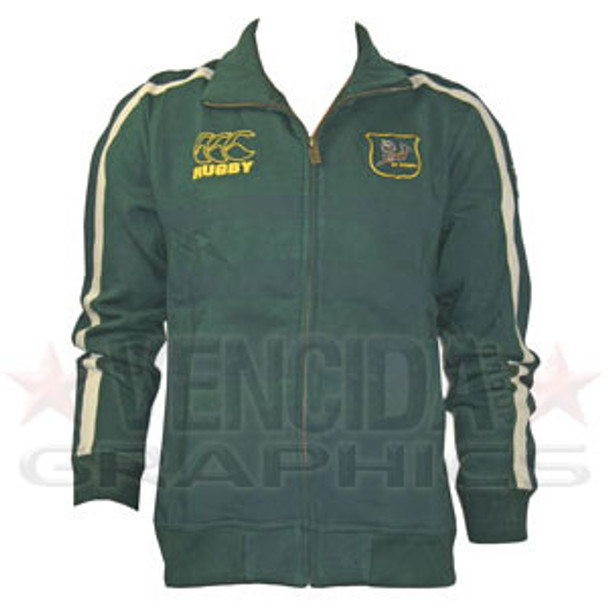 The South Africa Off Field Full Zip Sweatshirt is predominantly green with a cream stripe down the length of each arm. It also has the South African Springbok badge embroidered to the left chest, with the CCC logo to the right.

HERITAGE
The first ever South African Rugby international took place at Port Elizabeth's St Georges Park Cricket Ground in 1891 in a test match between the touring British Lions and South Africa. Rugby became so popular that in 1902 there was a temporary ceasefire in the Second Boer War so that a game could be played between British and Boer forces. In 1903 the previously stronger British Lions touring team lost a series for the 1st time against the South African national side, which only fuelled the growth of Rugby in South Africa. In 1906-1907 the South African National Rugby side toured Great Britain playing all 4 of the home nation sides. It was the South African captain Paul Roos, who first used the term Springboks to describe the team, to prevent the British press from coining their own nickname! From this point on The South African press refereed to them as "De Springbokken". The springboks also crossed the English Channel to France to play an unofficial match against France; South Africa won this first encounter 55-6! In 1912-1913 the Springboks returned on another European tour, this time they beat the 4 home nations and France before travelling home victorious!

MSRP: £32.63
Now: £28.55
Was: £32.63
The South African Springbok Golfer Polo Shirt manufactured by Canterbury (CCC) is the official short sleeve polo shirt that the players will wear after matches in press conferences. The South Africa...

MSRP:
Now: £29.95
Was:
This classic bottle green rugby polo is perfect for any true fan wanting to show their support for the Springboks.

MSRP:
Now: £42.95
Was:
The Official south africa springboks rugby graphic hooded sweat in green is a comfortable leisure hood made of a soft cotton / polyester mix. The hoody has the Springbok print to the centre chest. ...

MSRP:
Now: £28.96
Was:
Let everyone know you're a Springbok through and through. Whether you're in the stadium or cheering back home, you'll stay cool and comfortable no matter how tense the game gets. Show your Springbok...

MSRP:
Now: £17.95
Was:
This classic bottle green rugby polo is perfect for any true fan wanting to show their support for the Springboks. Poly-cotton material Short Sleeved Embroidered Springbok logo to left chest.